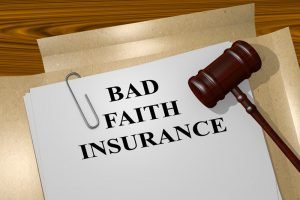 Consider the hypothetical situation above, if an excess verdict is entered against the at-fault driver in that matter and a claim for damages in excess of the $10,000.00 insurance coverage is pursued, it will be in the form of a common law bad faith action.  In Boston Old Colony Ins. Co. v. Gutierrez, 386 So. 2d 783, 785 (Fla. 1980), the Florida Supreme Court summarized the insurer’s common law duty of good faith as follows:

“This good faith duty obligates the insurer to advise the insured of settlement opportunities, to advise as to the probable outcome of litigation, to warn of the possibility of an excess judgment, and to advise the insured of any steps he might take to avoid same. The insurer must investigate the facts, give fair consideration to a settlement offer that is not unreasonable under the facts, and settle, if possible, where a reasonably prudent person, faced with the prospect of paying the total recovery, would do so.” (citations omitted).  See also Powell v. Prudential Property & Casualty Ins. Co., 584 So. 2d 12, 14 (Fla. 3d DCA 1991) (stating the duty of good faith requires the insurer to advise the insured of settlement opportunities, probable outcome of a lawsuit and to warn of a possibility of an excess judgment).

Florida courts have reasoned that this duty of good faith arises because the insured has surrendered to the insurer all control of the handling of the claim and defense, and, accordingly, the insurer must assume a duty to exercise such control and to make decisions in good faith and with due regard to the interest of the insured.  Boston Old Colony, 386 So. 2d at 785.  See also Florida Farm Bureau Mutual Ins. Co. v. Rice, 393 So. 2d 552 (Fla. 1st DCA 1980).  Thus, the focus in a bad faith case is not on the actions of the claimant but rather on those of the insurer in fulfilling its obligations to the insured.  Infinity Ins. Co. v. Berges, 896 So. 2d 665, 677 (Fla. 2004).

Third-party bad faith claims arise from an excess judgment entered against an insured.  In such cases, the issue is whether the insurance company would have resolved the case within policy limits if it had acted fairly and honestly towards its insured with due regard for his or her interests.  In North American Van Lines, Inc. v. Lexington Ins. Co., 678 So. 2d 1325 (Fla. 4th DCA 1996), the court noted that an insurance carrier must evaluate settlement proposals as though it alone carried the entire risk of loss.  Insurance companies have to fulfill their fiduciary obligation to an insured by making decisions that are in the insured’s best interest.  Per Florida law, insurers should evaluate settlement offers from the perspective of whether an insured with unlimited assets would have tried to resolve the case for an amount within the applicable policy limits.  If so, the insurance company in good faith should resolve the case within policy limits. See Campbell v. Government Employees Ins. Co., 306 So. 2d 525 (Fla. 1974).

Additionally, insurers have good faith obligations to communicate with their insureds regarding settlement offers and negotiations.  In Odom v. Canal Ins. Co., 582 So. 2d 1203 (Fla. 1st DCA 1991), the insurer received a policy limits demand and responded with a counteroffer.  The court stated that even if the insurer acts reasonably in rejecting a settlement offer, the insurer may still be liable in bad faith if it failed to advise the insured of the offer to settle and the counteroffer and advise the insured of the possibility of an excess judgment.  Id.; Berges, 896 So. 2d 665, 680 (“The duty to inform the insured of settlement opportunities is one of the duties subsumed within the duty of good faith owed by a liability insurer to an insured.”)  Nevertheless, “[t]he failure to inform the insured of the settlement offer does not automatically establish bad faith; it is simply one factor for the jury to consider in determining whether the insurer acted in bad faith.”  Berges, 896 So. 2d at 680. (citations omitted).  See also Campbell, 306 So. 2d at 530-31.  As an issue of fact, it commonly must be decided by the jury.

Insurance companies may be liable for an excess judgment when they do not reasonably accept an injured party’s demand that the policy limits be tendered within a certain time period. Whether a time limit demand for policy limits is reasonable must be analyzed on a specific factual basis.  See Kivi v. Nationwide Mutual Ins. Co., 695 F. 2d 1285 (11th Cir. 1983). For example, in DeLaune v. Liberty Mutual Ins. Co., 314 So. 2d 601 (Fla. 4th DCA 1975), a ten-day time limit demand was held to be unreasonable where the demand was made less than two months after the accident at a time when the insurance company had not been able to obtain necessary information.  The court reasoned that the insurer was not required to accept “at face value the medical information furnished by the other party without even any inquiry.”  Id. at 603. The court noted that the demand was a “charade and a set-up.”  In Clauss, 523 So. 2d at 1178, the insurer was also held not to have committed common law bad faith where after a five-day demand letter for tender of limits, the insurance company within two days requested medical records to verify the extent of the injury and expressed a desire to tender policy limits after verification.  In contrast, in Hartford Accident Indemnity Co. v. Mathis, 511 So. 2d 601 (Fla. 4th DCA 1987), a ten-day demand letter resulted in bad faith on behalf of the insurer where the insurance company had information regarding injuries to the plaintiff, and it was clear that this was an absolute liability case with known policy limits.  Similarly, a failure to promptly respond to a settlement offer after damages are verified may result in a finding of bad faith.  Cotton States Mut. Ins. Co. v. Trevethan, 392 So. 2d 1373 (Fla. 5th DCA 1980).

WHAT IF THE AT-FAULT DRIVER’S INSURANCE COMPANY RESPONDS TO A DEMAND SAYING IT NEEDS MORE INFORMATION (MEDICAL RECORDS) TO EVALUATE THE CLAIM?

It is not sufficient for an insurance company to argue in the bad faith litigation that it needed additional information to adequately investigate the demand if the insurance company does not take appropriate steps to seek such information contemporaneously with the settlement offer. See Government Employees Ins. Co. v. Grounds, 311 So. 2d 164, 166 (Fla. 1st DCA 1975). In Grounds, the Florida court noted that the insurer’s contention that it could not adequately investigate damages would have been a “valid contention” if the insurance company had sought medical authorization and had been refused.  Likewise, if certain impediments to settlement exist, such as additional insureds to be protected or outstanding liens, such impediments should be identified in response to the offer.  Kivi, 695 F.2d at 1288.  Additionally, when an insurer has investigated and determined that a judgment in excess of policy limits is likely, an insurer has an affirmative duty to initiate settlement negotiations and cannot just wait for a settlement offer to be made by the injured party.  Powell, 584 So. 2d at 12.

When an insurer has improperly and unreasonably rejected an offer to settle, a subsequent offer to settle for policy limits will not protect the insurer from bad faith liability.  For example, in Grounds, 311 So. 2d at 166, a policy limits offer was ultimately made, although later than it should have been.  Nevertheless, the insurer was found to be liable for the excess judgment in a common law bad faith action.  As the Third District Court of Appeal stated in Powell, 584 So. 2d at 13:  “The ultimate tender of the policy limits does not automatically insulate an insurer from liability for bad faith.”  A primary issue is whether the insurance company had a reasonable opportunity to investigate and evaluate the claim.  If so, tendering policy limits after expiration of a time limit demand will not insulate the insurance carrier from bad faith liability.  Powell, 584 So. 2d at 12.

WHAT IS A REASONABLE TIME LIMIT FOR A DEMAND?

Whether a stated time limit is reasonable will be evaluated by the circumstances of the claim and will be an issue of fact to be determined by a jury.  Indeed, Florida Standard Jury Instructions frames the issues to be resolved by the jury as follows:

The issue for your determination is whether (defendant) acted in bad faith in failing to settle the claim of (name) against (insured). An insurance company acts in bad faith in failing to settle a claim against its [policyholder] [insured] within its policy limits when, under all of the circumstances, it could and should have done so, had it acted fairly and honestly towards its [policyholder] [insured] and with due regard for his interests.

To prevail on a cause of action for bad faith, a plaintiff must show that an insurer failed to settle a claim within its policy limits when it could have and should have done so.  Accordingly, to establish bad faith liability, there must first have been a chance to settle for the policy limits and that opportunity should have been taken based on all of the circumstances.

CONTACT US IF YOU HAVE BEEN IN A FLORIDA CAR ACCIDENT